Dallas returns on TNT on August 18 for the second half of their new third season, and involved in a lot of that drama is the Ramos family — matriarch Carmen Ramos (Marlene Forte); her daughter, Elena (Jordana Brewster); and her son, Drew (Kuno Becker). We spoke with the very talented Marlene Forte about what is coming up for Carmen Ramos as well as several other projects she currently has in development. 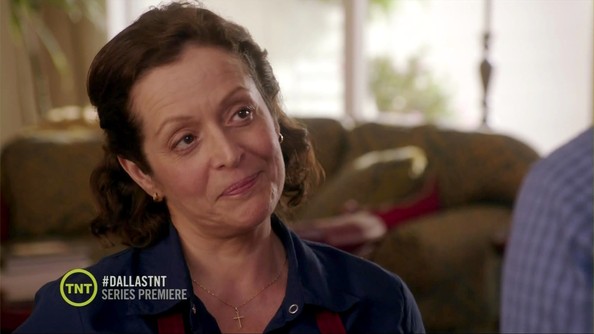 Could Dallas Season 3B be subtitled “Ramos Revenge?” It sounds like it might be possible. Read on…

KSITETV’s CRAIG BYRNE: For those who aren’t familiar with the newest version ofDallas, can you tell us about Carmen Ramos?

MARLENE FORTE: Carmen was not in the first incarnation of Dallas. She came with Brenda’scharacter, I like to say, which is Bobby’s new wife. Basically, the Ramos [family] – which is Carmen Ramos and [daughter] Elena – were taken in when my husband dies in an oil rig accident on our land, J.R., in all his ruthlessness, takes us in, and he decides that he’s going to take care of me and Elena.  I’ve been living with them as part of the family since the accident and Elena was nine. And of course, now she’s really betrayed by all this new stuff that’s come out, that J.R. may have stolen our land and all that. So it’s a big old family feud.

If they came when Elena, does that mean that Elena was definitely not named after Ellie Ewing, the matriarch of the Ewing family?

No, no, no. I don’t think so. Although I like to think that they’re [the Ramos family] going to own it all soon, so she’ll be the matriarch of the Ramos family! We’ll see what happens.

Elena wants revenge for what J.R. did with the father’s land. Wouldn’t it be easier to just go to Bobby and be like “Look what J.R. did?”

Yes, but then there’s no drama in that, is there?

How do you think Carmen would handle the situation?

It’s funny, because just ’til last season, we used to have a joke that the only people that didn’t lie on the ranch were Elena and Carmen. But that has gone right out the window this year. [laughs] We’re just a bunch of lying, conniving… I don’t even know. I think Carmen would have handled it a little differently. I think Elena gets her emotions mixed up because of the boys, and the relationship that she’s had with both of them at this point. So, yes. Carmen would definitely have handled it a little different. I think Carmen would have gone to Bobby, but that’s why I think Elena didn’t tell me about it, either. She keeps her secret ’til the end, almost. This is all new.

What other challenges are coming for the Ramos family once Dallas comes back in August?

Well, the biggest challenge will be to heal the mistrust between the families at this point. At this point, we feel betrayed, and they feel really betrayed by us, as they should. I mean, Elena is really conniving and contriving right now! It’s not what I taught her. But she’s angry… she’s not as angry as my son, as Kuno’s character Drew is… I think he’s more of a loose cannon… but I think she’s angry, so I think the biggest challenge would be to find the trust again;  because I always considered them [the Ewings] to be my family, and I fiercely protected them. But she’s just so… her head is reeling. I mean, everything for the last twenty years has been a lie! Or whatever, 15 years… since Elena was 9. This guy killed my husband! I mean, not literally, but he might as well have by stealing that land from us. It’s the Revenge of the Mexicans! [laughs] 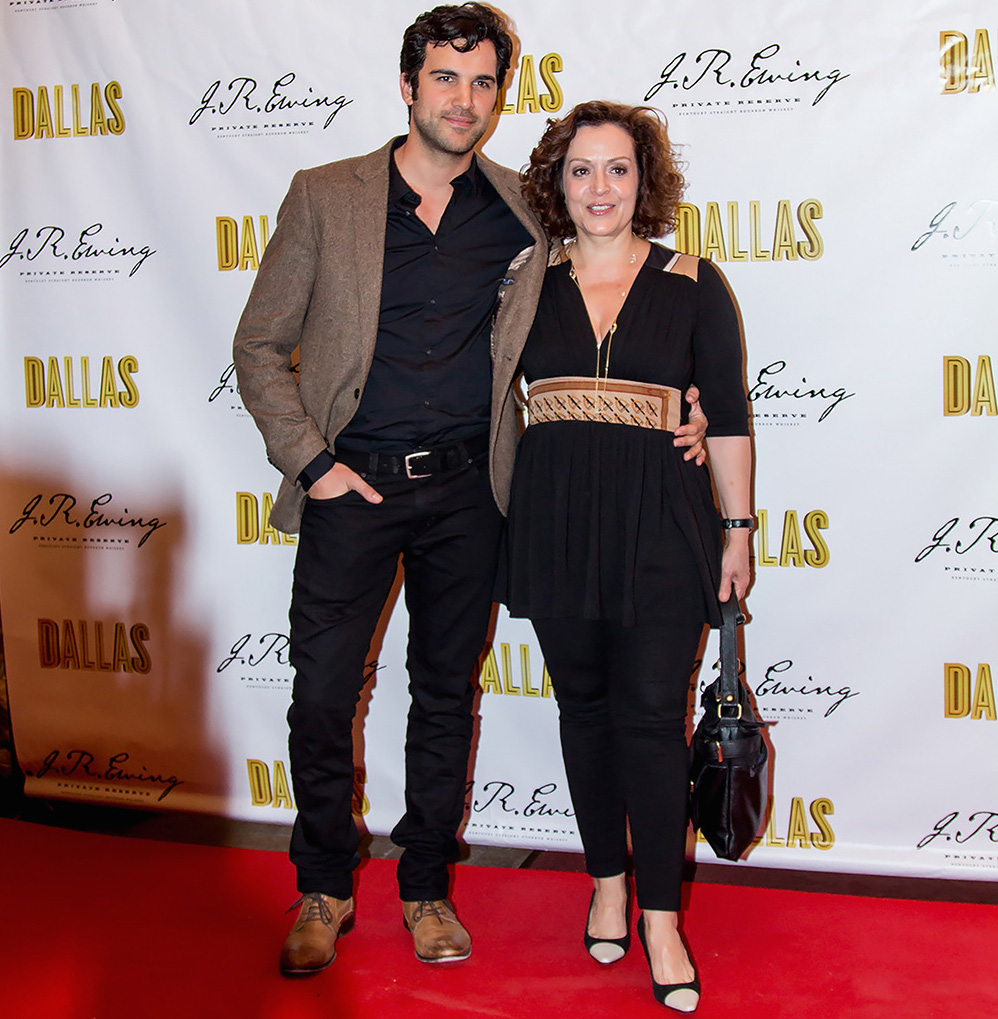 Speaking of things that will make Carmen angry, how do you think she’ll react when she finds out what Joaquin does to Elena?

Oh, man. It’s not good for Joaquin. [laughs] I’ve already warned him early in the season, “don’t mess with my kids!” You know, right now I think he has the upper hand, because he has them duped. He has them really thinking that he’s our champion, and that he’s fighting for us, and to regain what we lost… but it’s all a lie. He’s selfish and EVIL! And let me tell you, [Juan Pablo Di Pace] is one of the nicest guys I’ve ever worked with! Just like Larry Hagman was… you know, sometimes the worst villains on TV are played by the nicest people!

Is there any chance that we might see some flashbacks involving Carmen, Elena, Drew and possibly even Joaquin?

Hmm. There is nothing like that planned on this season, but that doesn’t mean that – when we get picked up, knock on wood – we haven’t been picked up yet – there’s no reason why they wouldn’t do something like that next year, if it came up. But there’s no flashbacks planned for this year.

Do you have a dream storyline for Carmen that you would like to see?

Oh God, yes. I want her to take over Southfork! [laughs] I do. I want them to take back that land! It’s not gonna happen, trust me. But if I were writing it? I’d have Brenda making tamales for ME!

I read an interview with you where you said that you weren’t a regular viewer of the originalDallas, but upon getting the role, did you look back and watch any episodes to try to figure out where Carmen might have fit in?

I was not a regular viewer because I was a young mom, and trying to get through college at the time. I really was introduced later on with the spin-off, Knots Landing, and that’s when I went back, then, to really catch up, and of course, you had to be living under a rock not to know who J.R. was back then, or who shot J.R. and all that stuff. But I was really just trying to get through college at the time. But then I went back, and I saw everything.

I am a huge fan of Larry Hagman. I always have been, from I Dream Of  Jeannie. So I was just thrilled to see how he became the superstar that he became with the Dallas series. He was just brilliant. But I didn’t really look at it for Carmen, as far as the background of Carmen, because Carmen didn’t come [until later]. Carmen came with Bobby’s new life, and his new wife, and of course, that’s not true, because if you track it back the way they have it set up, I’ve been living with them since she was 9; so in that case, so of course Bobby might have still been married to Pamela, but we haven’t really talked about that.

So Carmen was just there on Teresa’s off days?

Yeah, exactly! [laughs] Carmen was Teresa’s sister! She went back to Mexico, and I took over for the Ewings.

You mentioned you had been a fan of Knots Landing. Did you get to work with Ted Shackelford when he guest starred on a few episodes in Dallas Season 2?

I did! I got to work with him. We don’t actually have scenes together, but we were in some episodes together and we got to hang out. Everybody was there at the funeral.

Unfortunately, I don’t have a lot of scenes with people outside of the main family, because I’m always at home, basically, so if they’re not at the Ranch, there’s really no reason for me to be talking to anybody. 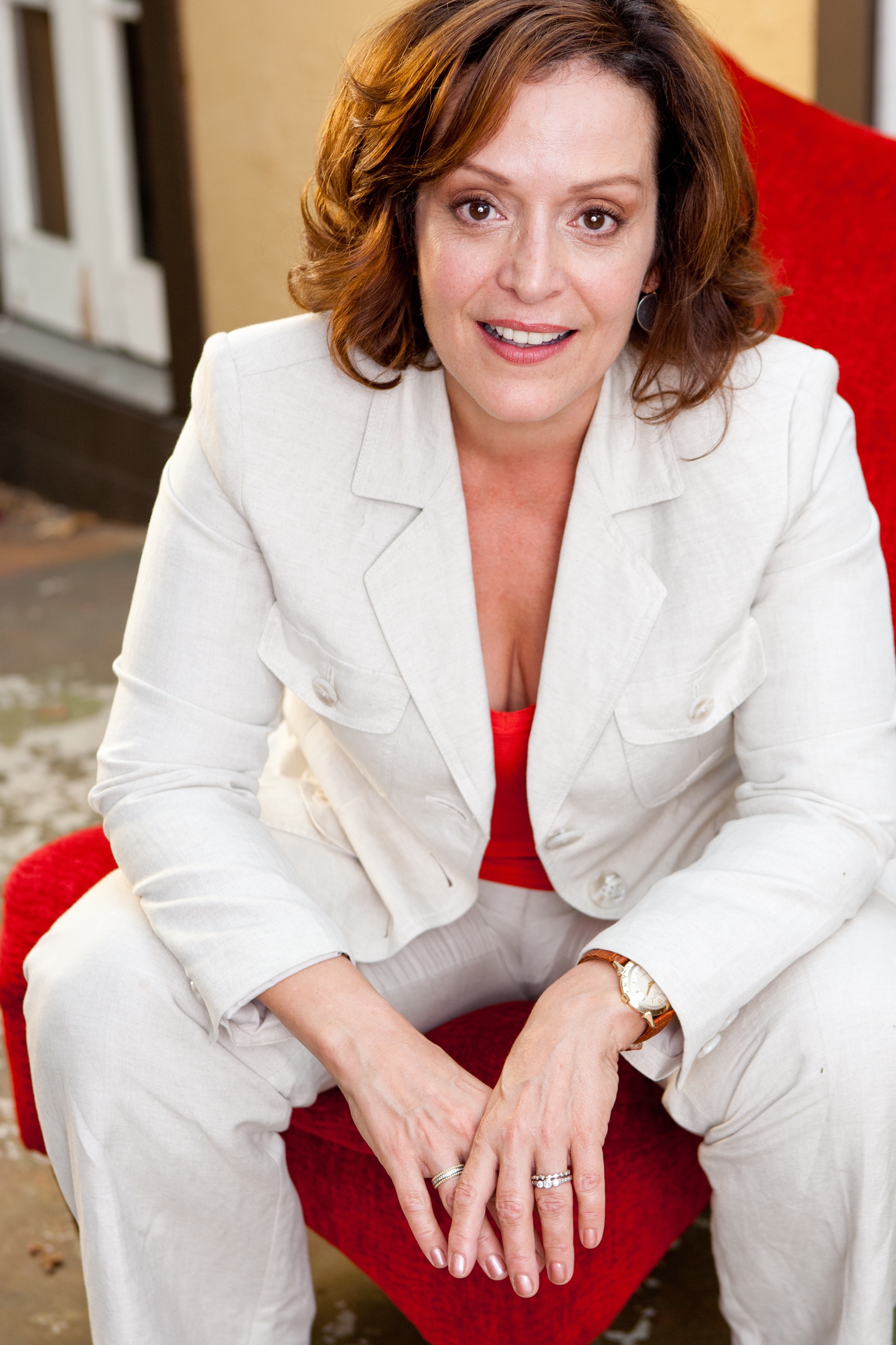 Speaking of the Ranch, Sue Ellen is spiraling, and there’s a fire at Southfork. Have you ever been told of any past that Carmen might have had with Sue Ellen, or was she mostly gone by the time Carmen was there?

No, but during the funeral stuff, Linda Gray and I spoke about what type of relationship they might have.

Carmen likes Sue Ellen. I think Carmen just feels like she’s a woman who stood by a man who was not really nice, but you know, she’s a Latino woman, and she kind of understands why Sue Ellen stayed there, but I don’t think she condones her drinking… but I’m not even really sure that Carmen’s aware of that yet. That’s a good question that you posed to me; I know I wasn’t aware of it during the funeral. I’m not sure how much Carmen knows of how bad Sue Ellen is.

Although, I always say that whoever feeds you knows all the secrets of a family. So even if it’s not said, Carmen feeds them, washes their clothes… so she knows what’s going on.

Do you speak with Cynthia Cidre before every season starts about your character arcs?

We have spoken about where she’s going, but again, I’m like #13 on the cast list, so Carmen’s arc is pretty steady… although now, I made a joke the last couple of episodes, and wait until you see the second half… it’s like “oh my God, you guys! What am I gonna do now?!?” There’s a lot of changes that are gonna be happening to the Ramos family. So I  say to Cidre “what are you gonna do? Don’t send me back to Mexico!” She’s like “no, no…” I’m like “okay. That’s good.”  I don’t speak to her as much as  the other cast membersdo, but Cynthia has her hands on all of us.

On that note, what do fans have to look forward to when the show returns in August?

Hang on tight! It’s a roller coaster! We only have a few episodes when we come back, and it’s gonna be like Magic Mountain. It’s gonna come at you fast and furious! I think there’s going to be turns you don’t see coming. It’s Ramos-heavy, the next five episodes, just because after this fire, a lot of things are going to come up to the surface, and it’s going to force other characters to do desperate actions, and they’re going to come with a lot of consequences.

Is Kuno Becker back for a number of those episodes?

Yes. You will see more of Drew at the end of this season.

What other projects do you have coming up that people should look for?

I have a movie coming out, called The Assassination of a Citizen, where I actually play a Breaking Bad kind of character, which I’m kind of nervous about, because I always get to play someone’s Mama and a good person, and I’m not a good person in this movie! I’m actually quite Breaking Bad bad. So that’s coming up, and I’m a little nervous about that…. and then I have a short that I have produced. It’s a Cuban short, done in Cuba, called Mondongo Cubano and I’m just doing festivals with it now. I’m not in it. Just a producer on this one.

I also have a full-length movie called I Love Hate. Nelson Pena is the writer and director, and I’m helping to produce that, and I’ve got my friend David Zayas on board, and hopefully Laverne Cox… we almost got her, so she’s rumored to be on board. It’s about a young Latino man who wants to transition to be a woman. It’s a really beautiful, really well handled story about how we deal with gay issues in the Latin world.

Those are the big things that I have right in front of me right now.

Dallas is back August 18 on TNT. Our thanks to Marlene Forte for taking the time to speak with us!